Of course James Foley is not the first person to be brutally murdered in this way, and throughout the history of man's time on this planet there are countless examples of this brutality whether in warfare, or just plain evil.... not that many days ago I reflected upon the image of a child said to be holding a severed head.

Even my favourite artist Caravaggio saw the potence of the image in his painting of David with the head of Goliath in 1610.

If you read E B Sledge With the Old Breed: At Peleliu and Okinawa you will read one man's sometimes moving but always candid observations on man's brutality to man during warfare..... and I don't mean just firing bullets at each other....and worse still it was not unilateral in it's brutality....

But James Foley wasn't a soldier.... he was just an ordinary bloke trying to find his way through the shit of life... but beyond that ordinariness, with a camera instead of a gun, he took aim and sought to make the world a better place..... sadly he was a man in the wrong place at the wrong time..... in much the same way as the passengers on the malaysia airlines flight MH17 [and sadly they were not the first to ever suffer this fate], but those passengers were in the wrong place at the wrong time.... and all for what ?

What makes James Foley's execution stand out more than any other [do you remember Ken Bigley ?] .......I suppose it is because his seems to be the first YouTube beheading execution....

I wonder if now on the twittersphere we will have the celebrity hashtag selfies holding up their signs pleading for beheadings to be banned ?

What is interesting is the amount of vacuous debate surrounding the video released.... with many of the main news outlets with their feigned protection of our virtues..... oh it is just too shocking for us to show you the video.... seemingly we even have the Metropolitan Police suggesting that anyone who views the video is committing an offence....... what utter crap....

There is no doubt, the video is shocking and it is painful to see.... but it does not actually show the act of killing James Foley, it shows that sad moment but a breath before..... and then the image of the aftermath of such a brutal act......

Viewing the video is not going to change events, it will not turn back time, nor is it supporting or advocating extremism..... but what is interesting is we look at Caravagio's painting without flinching..... we see adverts on the TV for so called entertainment games... we look at the violence it portrays without flinching..... ah but it's not real..... people cry.....

Maybe that's it........maybe the world does need to see the video of James Foley....
maybe then people can see just how evil this is.....
to see just how wrong his death is......
to see what a waste of his life it was/is.....
who knows then maybe we will wake up to this madness
We can only but hope his death means something........ 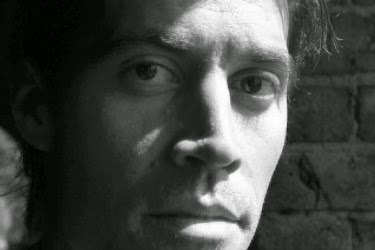 Stop all the clocks, cut off the telephone,
Prevent the dog from barking with a juicy bone,
Silence the pianos and with muffled drum
Bring out the coffin, let the mourners come.
Let aeroplanes circle moaning overhead
Scribbling on the sky the message He Is Dead,
Put crepe bows round the white necks of the public doves,
Let the traffic policemen wear black cotton gloves.
He was my North, my South, my East and West,
My working week and my Sunday rest,
My noon, my midnight, my talk, my song;
I thought that love would last forever: I was wrong.
The stars are not wanted now: put out every one;
Pack up the moon and dismantle the sun;
Pour away the ocean and sweep up the wood;
For nothing now can ever come to any good.
WH Auden
Posted by ageing man

just when you haven't seen a rainbow for ages and then 2 come along at once.... 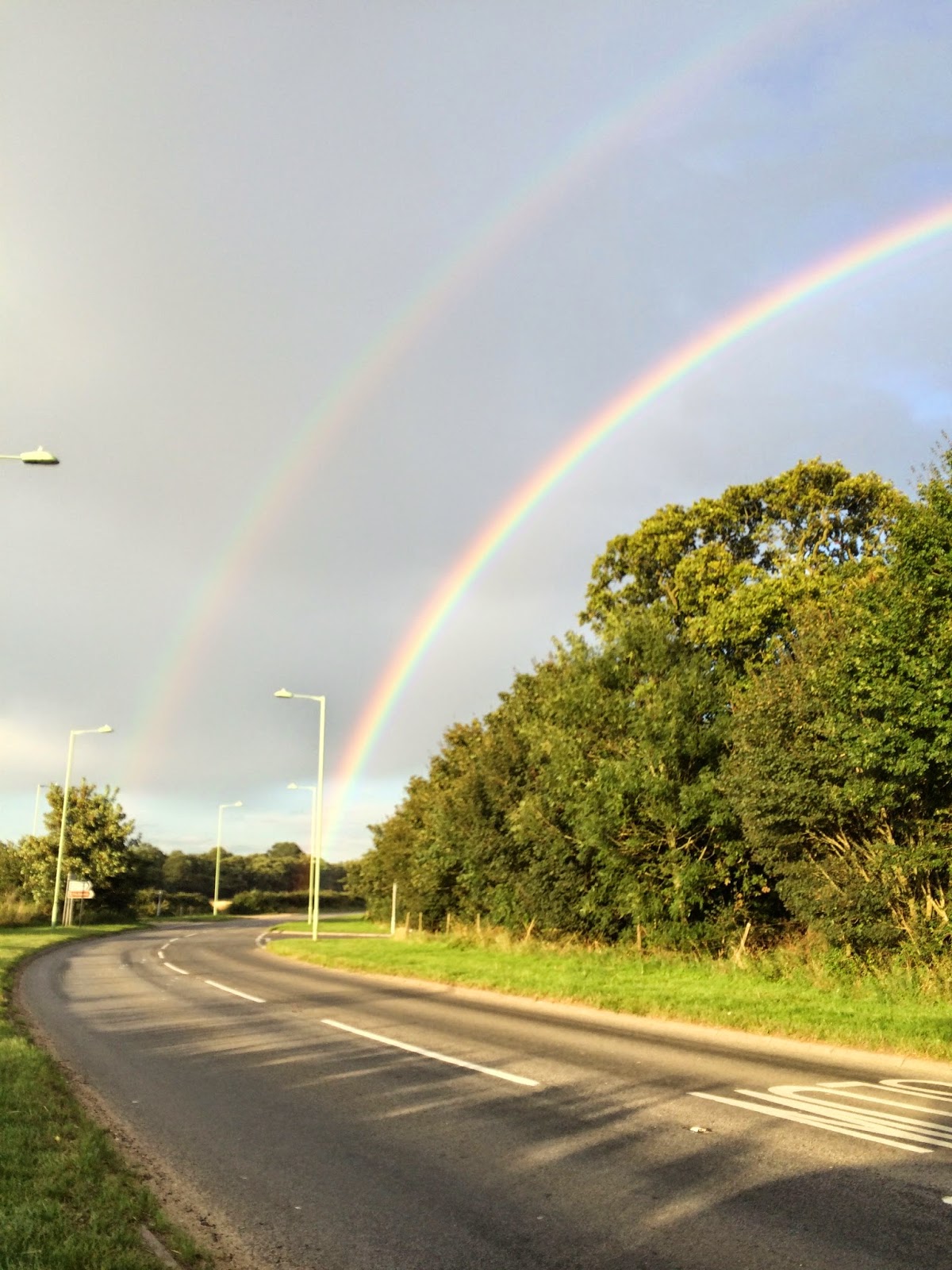 Rainbows are quite wonderful things, but not a clue why the song talks about pink when pink is not in the rainbow....who knows maybe the lyricist was colour blind drunk... but they say at the end of a rainbow there is a pot of gold..... 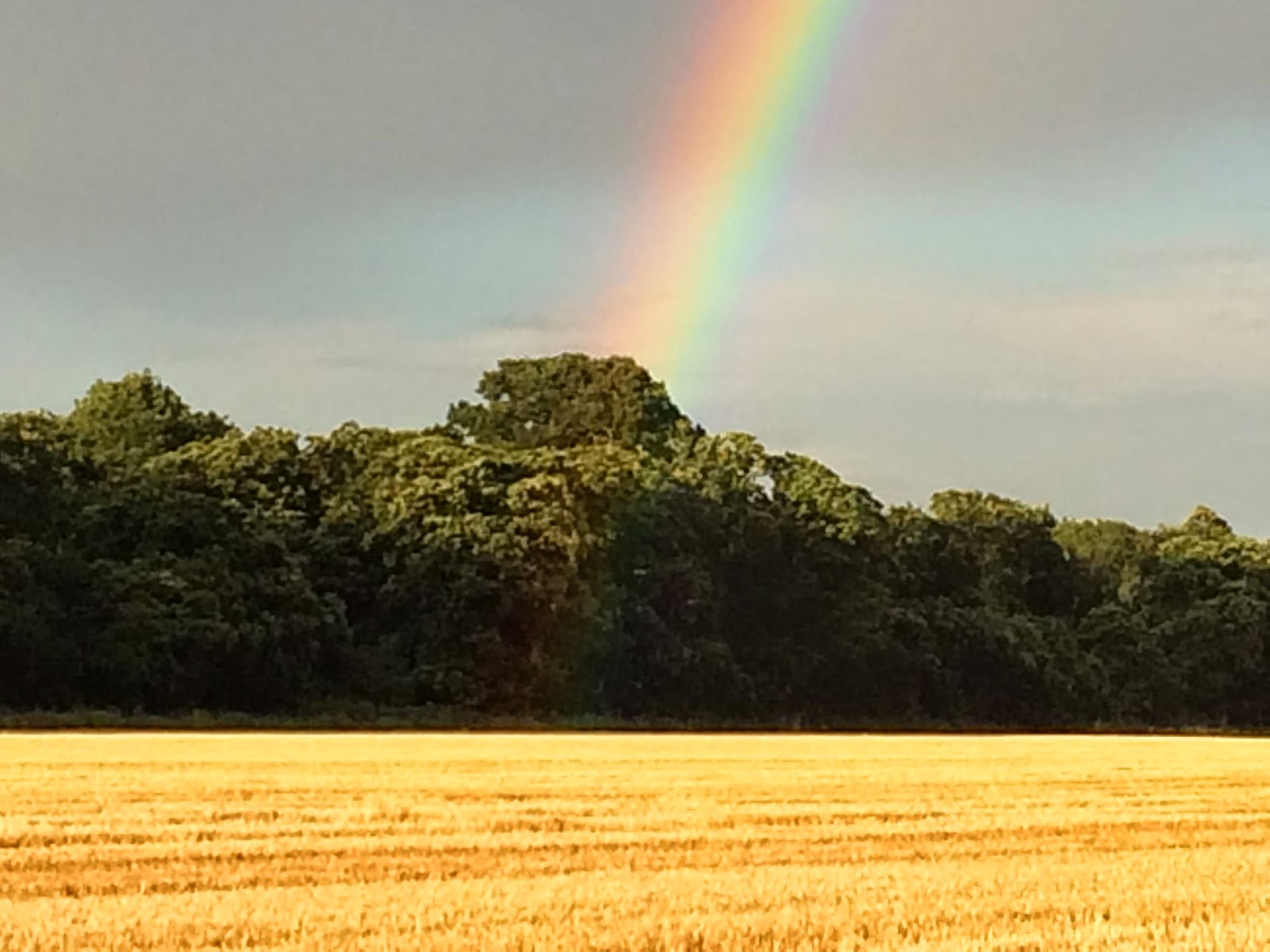 And sure if enough if you take a step back this is what you see....... 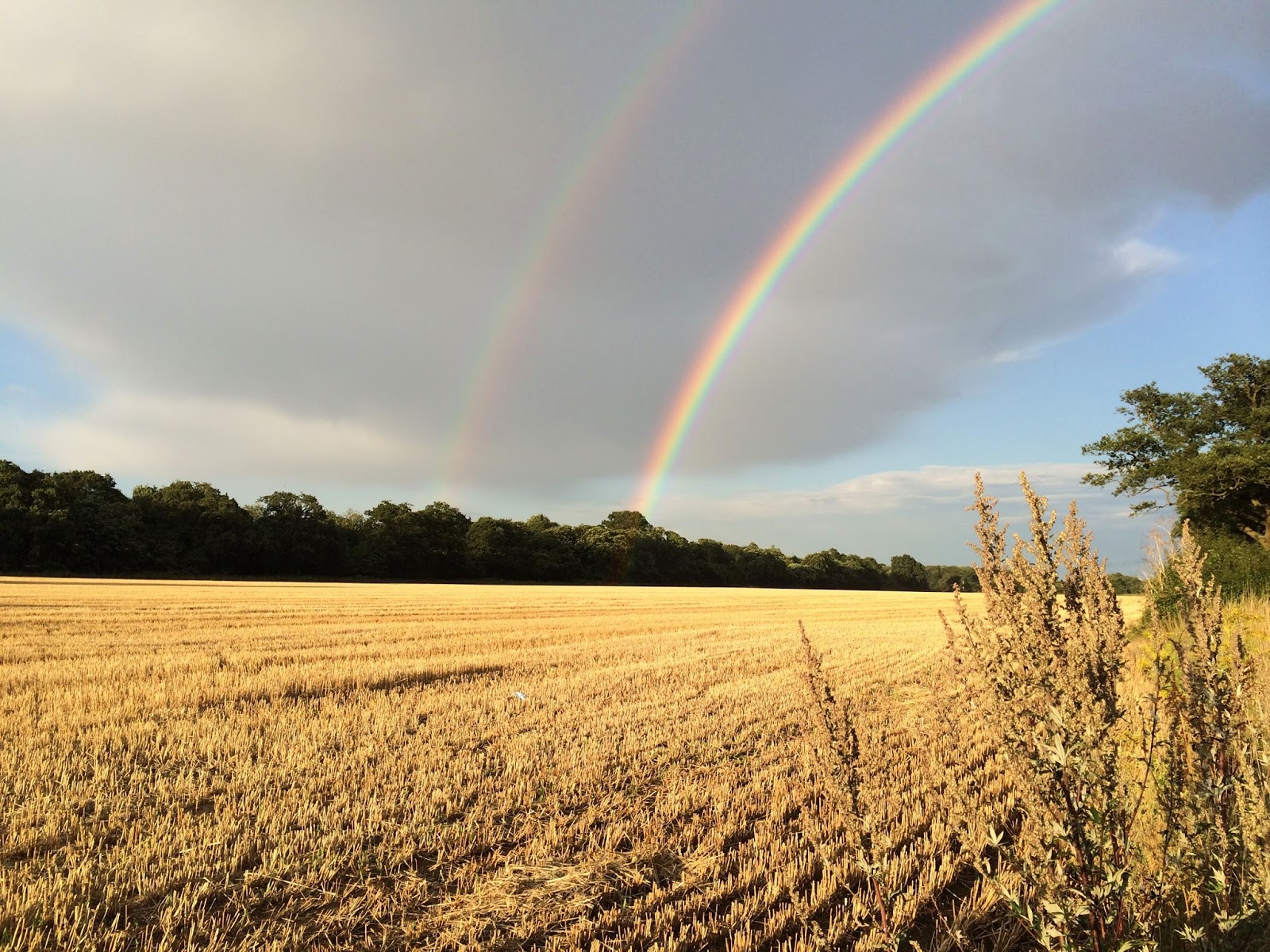 this is a great version too....

you can never cease to be amazed by the beauty of this world.....
Posted by ageing man

..... and I still know very little about it, nor what drives someone to take that ultimate step

I am not really sure why we see the death of a complete stranger as a conduit for our out pourings.... and truth be know,  I never knew the bloke.... no reason why I should...

Not only was he a fine comedian but he was a fine actor too.... some of his films were stinkers.... but there was the obvious wonderful movies too ..... but what ever character he played.... he made you believe in the character .... not the person playing the character.

The world according to Garp, is a book by John Irving and no matter how many times I have picked that book up it has defeated me, and that is rare for a book to do that....

But amongst a fine cast, I have seen the film version a countless times, and each time he brings the book alive ......

One other fine movie was/is  ...... What dreams may come .... not one of his most publicized films, albeit from 1998, and I don't think many commentators will reference it today.... but a film I tripped up over whilst remote control clicking...... and like the world according to garp, he played the part so well.

I am old enough to remember the TV - Mork & Mindy, which many have already spoken of, but it never did it for me..... but nevertheless this guy could read the telephone directory and make it sound funny.


It is speculated that he took his own life,
and it seems most likely that will be given as the official reason.......
I have no idea how many people take their own life each day,
99.999999% of whom we will never hear about.....

but it all goes to show just what complex people we are..... 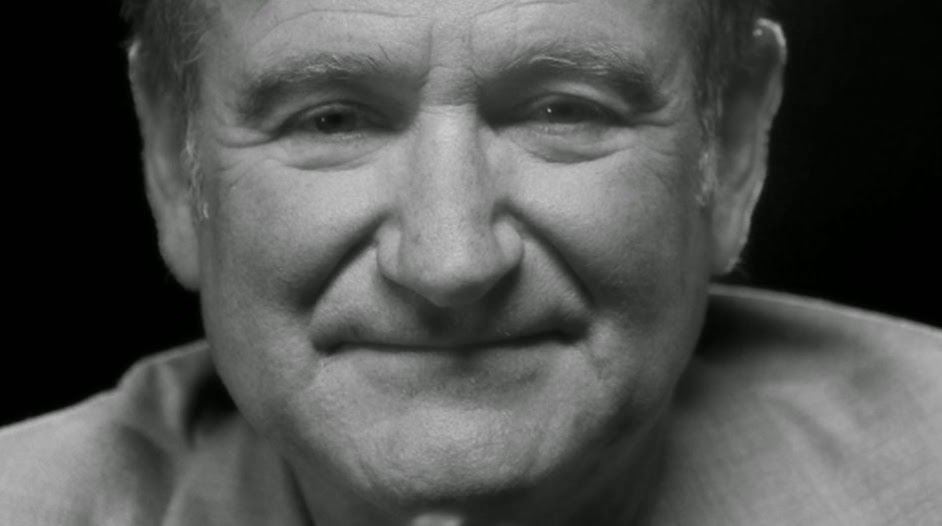 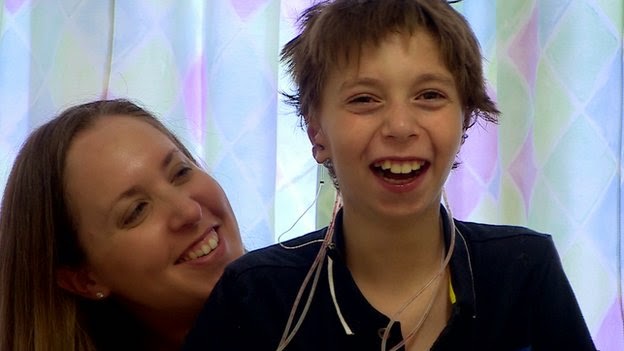 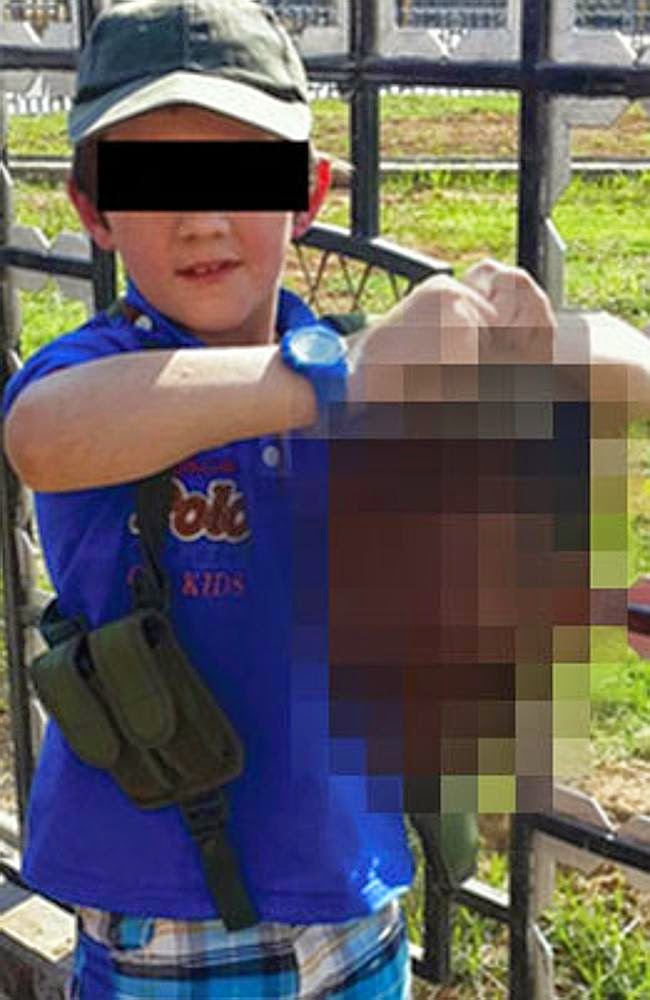 I think I prefer the image of Kieran Sorkin ...... his story is so much more endearing than that of Khaled Sharrouf’s son...... we are not told the name of the son.... but holding a severed head ..... definitely one for the family album......

what head are you wearing today.... ?

and a triple header too

from  Rainbows to
Fake plastic trees*
whilst left high and dry inbetween...


* and so the story goes, that it was seeing My Elvis live that inspired them to get this song to it's finished format. You can easily see why that story may just well be the reflection of truth

Email ThisBlogThis!Share to TwitterShare to FacebookShare to Pinterest
Labels: Radiohead

Before I reached the grand old age of 8 years and I was in to Led Zeppelin and Bowie..... it was the music of my parents that I sort of remember.....

I remember as a young child we had a radiogram, and I would spin the dial as fast as I could, and it would spin through the various radio stations..... I think I did it because I loved spinning the dial, not because my parents music taste was shite......

I don't recall Elvis being a big favourite in my house, although he did some great tracks... it was more like Tom Jones..... Roy The Big O Orbison.... god he was fantastic and taken too soon..... there was even some Mario Lanza.....and then there was my choice of Today's Friday Desert Island disc.....

Boy could this guy sing.... a voice like velvet... and whilst I have no visual recollection of him, countless times that velvet voice of his resonated from that radiogram....

Today's SoD is  one of my all time favorites of his, and sets the opening scene for one of the most iconic English movies of the 1960's [forget the shite of the 2003 remake, bloody dicks should have left well alone !].......


don't touch that dial.....
on days like these
I hear sweet music float around my head
I wonder what became of you......