you don't hear many Yorkshire accents in Cambridge, but last night.... by eck it was the dulcet tones of non other than Richard Hawley ..... aside from his singing, a couple of things about Richard Hawley ..... is that in fact he is not a strong toned Yorkshire man, and coming from Sheffield he doesn't actually say by eck very much, but he does like to use the word fuck alot in his sentences ....

I like a man who swears, on the basis of how much I like swearing ..... not offensive rude in your face swearing, but swear words used in the normal context of a sentence, not to shock but to give a gritty tone ..... but I didn't go to the Cambridge Corn exchange to hear Mr Hawley, swear [nor to exchange any corn] .... no it was much fucking better than that .... it was to quite simply to hear him sing and belt out a good tune .... back to blokes and guitars I suppose ...... 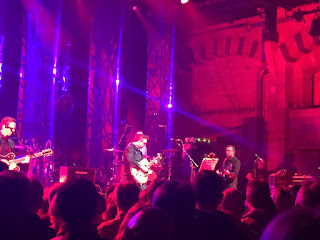 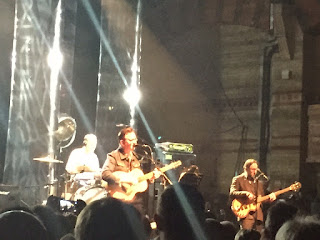 Here is a couple of other cracking tunes
he belted out last night,

Admittedly anyone under
the age of 45 yrs old stood out in the crowd
but this was by no means a sit down
with ya cardi and pipe gig ...

There are still plenty of dates left, and for sure
of those dates still to play
my first choice would be
The London Roundhouse, Camden

[Postscript: When I finally do fuck off to the live the life of a recluse in Italy, I won't miss emails, mobile phones, or even blogging for that matter, but I will sure miss seeing live music acts at great venues..... better than watching any footie match for sure]
Posted by ageing man